Jacob Landry came to the Oklahoma Works office seeking a new life. He had been unemployed for over 2 years and had been unsuccessful finding work. Jacob was fortunate enough to have parents who provided a house in exchange for maintenance work, but with no transportation of his own and no credentials beyond his GED, Jacob’s prospects for gainful employment were slim.

Jacob expressed feelings of defeat and hopelessness, but he was determined to make a change. Jacob had been researching employment opportunities on his own and knew he wanted to earn his CDL, but he had no idea how he would pay for training. Luckily, he was referred to Oklahoma Works and enrolled in the WIOA/Title 1 Adult program in August of 2019. With the cost of tuition, fees, and testing provided by WIOA/Title 1, Jacob was able to attend truck driver training at Arbuckle Truck Driving in Tulsa from 10/21/19 through 12/05/19.

Jacob immediately faced a hurdle since he had no transportation to and from the campus and no place to stay during the weekend. However, he was determined to prevail and managed to arrange his own ride to class and talked the school into allowing him to stay in their boarding facility on the weekends. Jacob did well in his classes and graduated from training, but failed his initial driving test. He did not let that deter him, however, and was able to pass the driving test on his next attempt, receiving his CDL in December 2019. In January 2020 he received several job offers right away and accepted a position with Dot Food Transportation earning $12.75 per hour plus miles. Jacob states that he loves his job and his new employer. He says WIOA/Title 1 has changed his life completely and for the first time in many years, he feels like he has a bright future ahead. 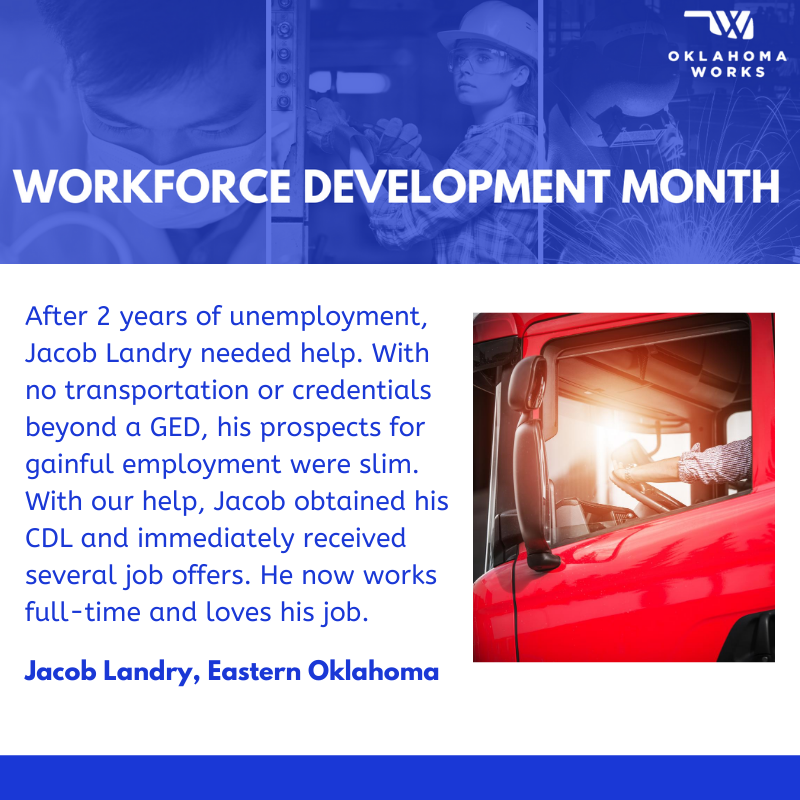